At Forerunner 3D Printing we currently producing HP MJF 3D Printed Parts that are made out of Nylon PA-12. They feel strong when handled, and the material spec sheet from HP says they are strong as well. We have had early success with using them in high load applications that required them to be strong however, we needed to produce our own evidence of MJF part strength as well as MJF part wear resistance in order to convince some of our customers of its viability in their applications. In order to accomplish this we handed the parts over to our sister company DeWys Engineering, and they designed a few tests that could show the true strength of MJF 3D Printed parts in various scenarios. The following are our independent testing results based on real world applications we have considered using MJF 3D Printed parts for. We plan to continue updating this page as more of our testing is completed. If you have a specific application you would like to see tested, let us know we would love to talk with you about it.

We have seen quite a bit of interest from various machine builders we work with around using MJF components as nesting details for holding components in place while they are assembled on automated / manual factory equipment. After presenting them with example nests the first questions that they asked was “how wear resistant is this Nylon PA-12 material”? Handing them a spec sheet and telling them to trust us was not going to cut it. The next step for us was to do some testing to prove out its wear resistance and that it could hold up to abuse as well as a traditional nesting that was machined out of Delrin or Nylon. 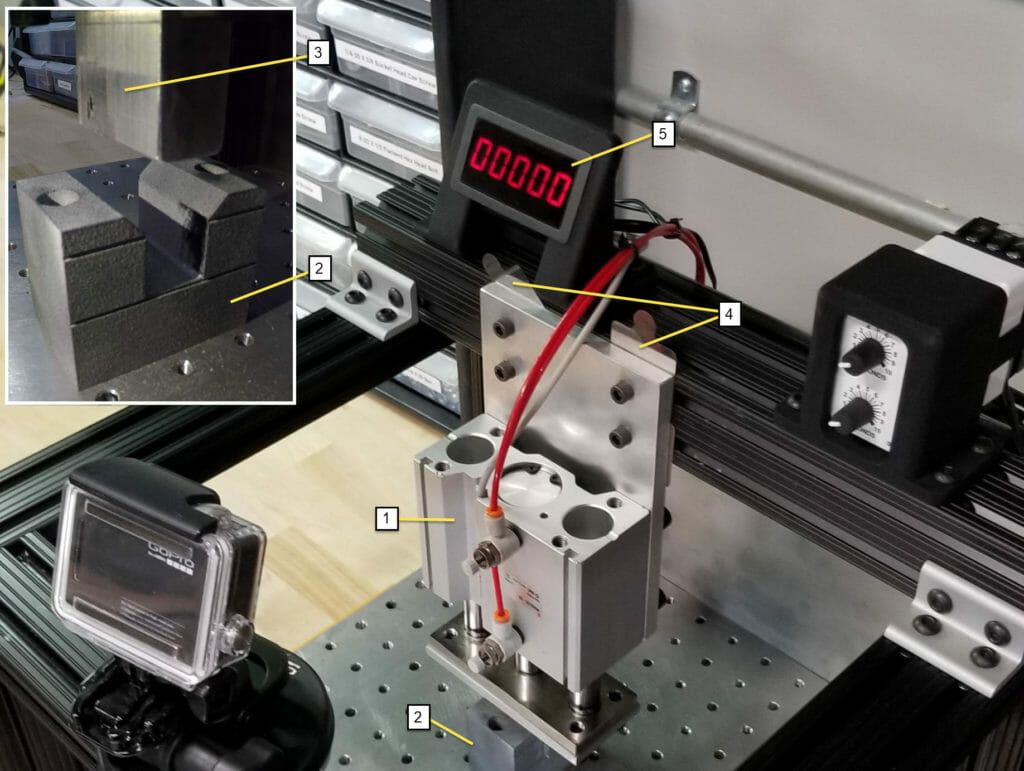 A purpose built MJF wear tester was constructed and the following test was run:

After 100,000 cycles the block was removed from the test bench and 3D Laser scanned, an inspection report was then produced. The full report can be viewed here. Below are the highlights: 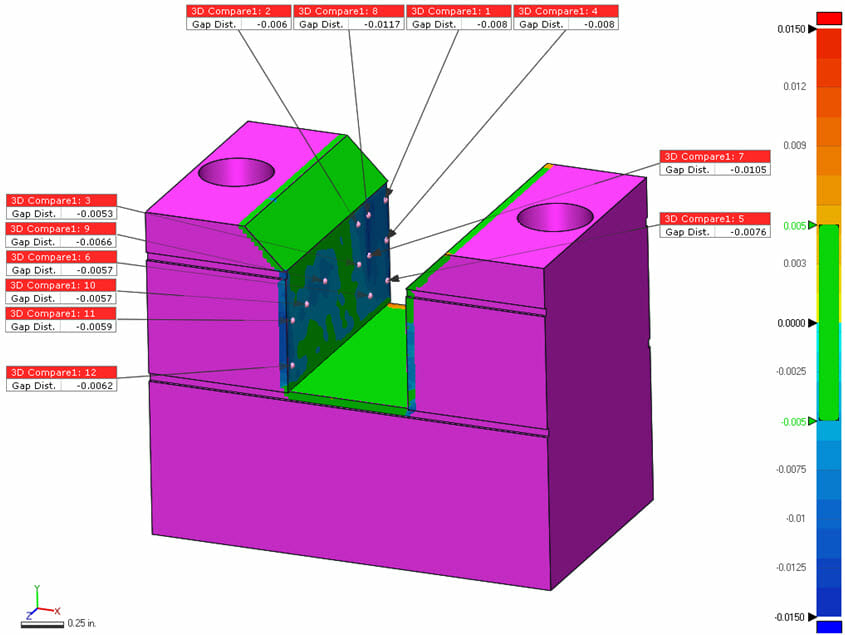 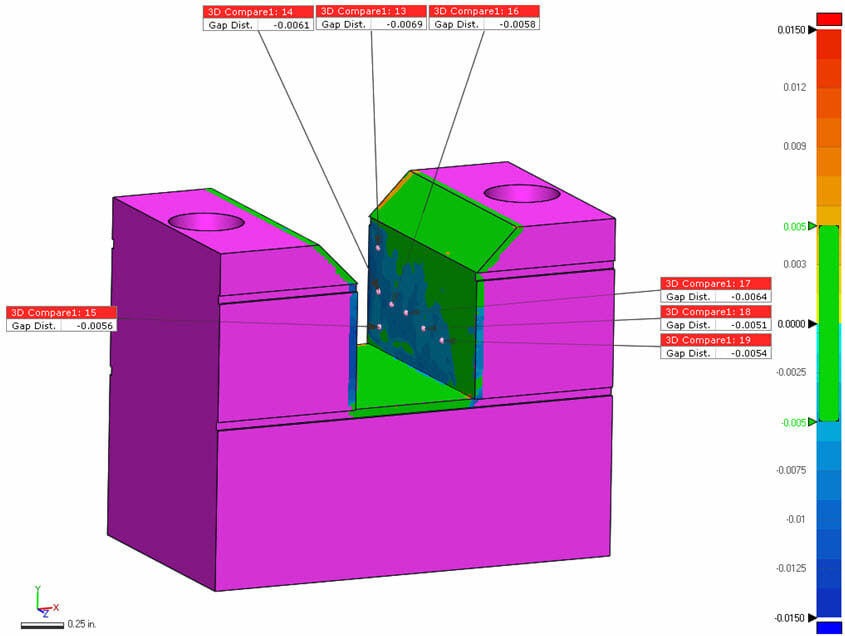 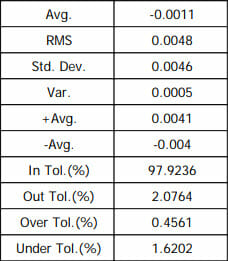 The end result of the testing was that the block showed some signs of highly localized wear up to .011″ but overall the MJF part wear was not as extensive as was originally anticipated. As a result, Forerunner 3D Printing is now producing nesting details for several of our machine build clients on our HP Multi Jet Fusion 4200 3D Printer in Nylon PA-12.

After being sandblasted 13,000 times in a DISAMATIC foundry mold production system test parts showed minimal wear, for a full write up on this test please visit our Foundry tooling page. 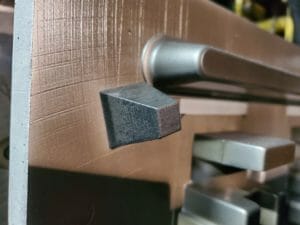 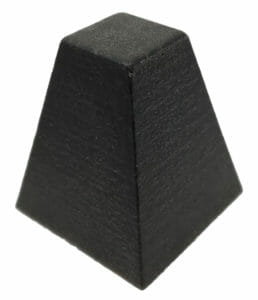 One of the first questions we got from a potential customer was “how well do these 3D printed parts hold threads under tensile loading”, we did not have a good answer for them so we decided to find out! This testing also dovetailed nicely into a broader question around MJF part strength in general so we combined the two. We printed 1/4″-20, 3/8″-16. and 1/2″-13 test bars with threaded holes in either end. We then printed corresponding MJF eye bolts with the appropriate thread size on them. After putting them together we placed them in out tensile testing rig and gave them a pull! Here are the results: 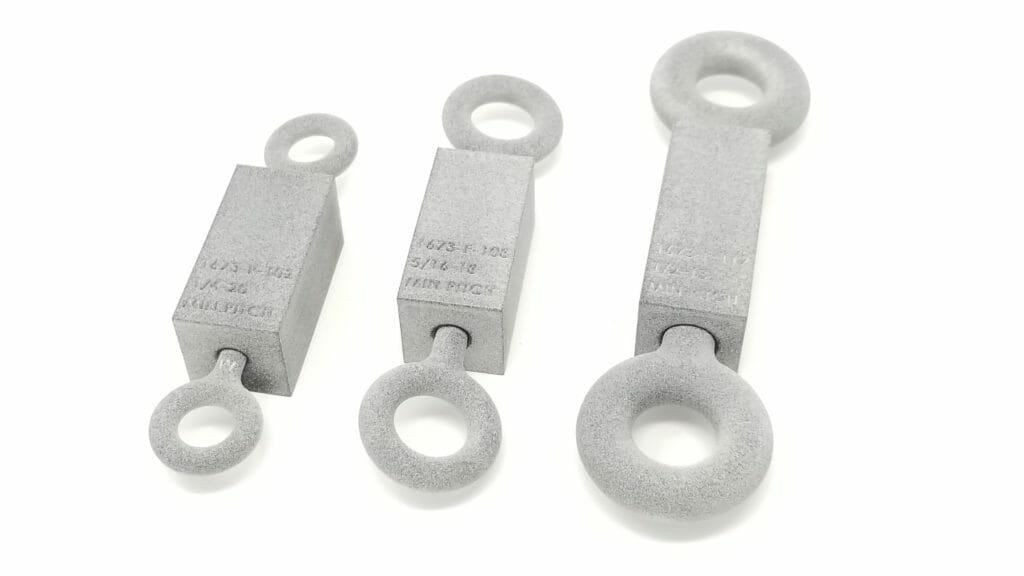 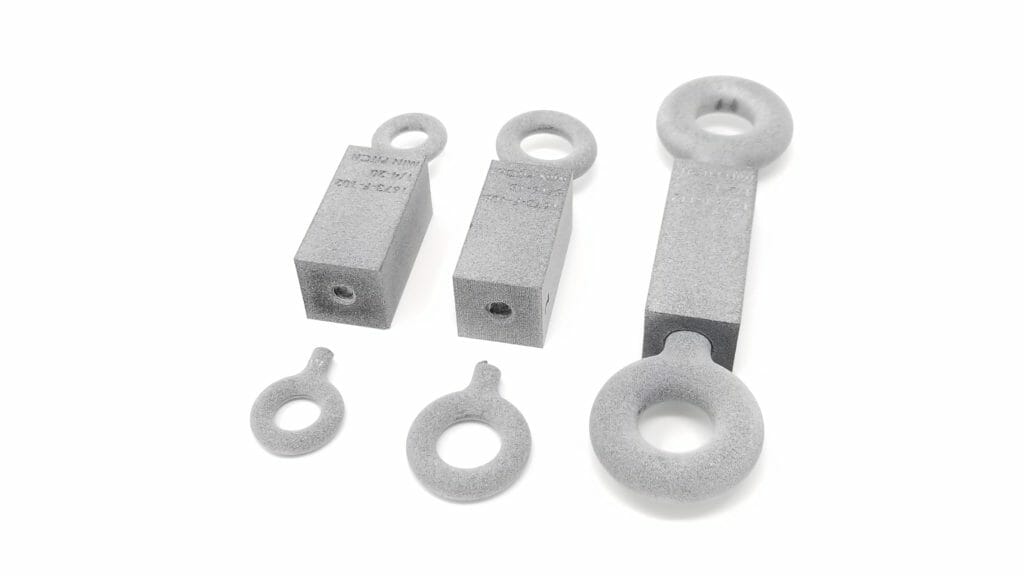 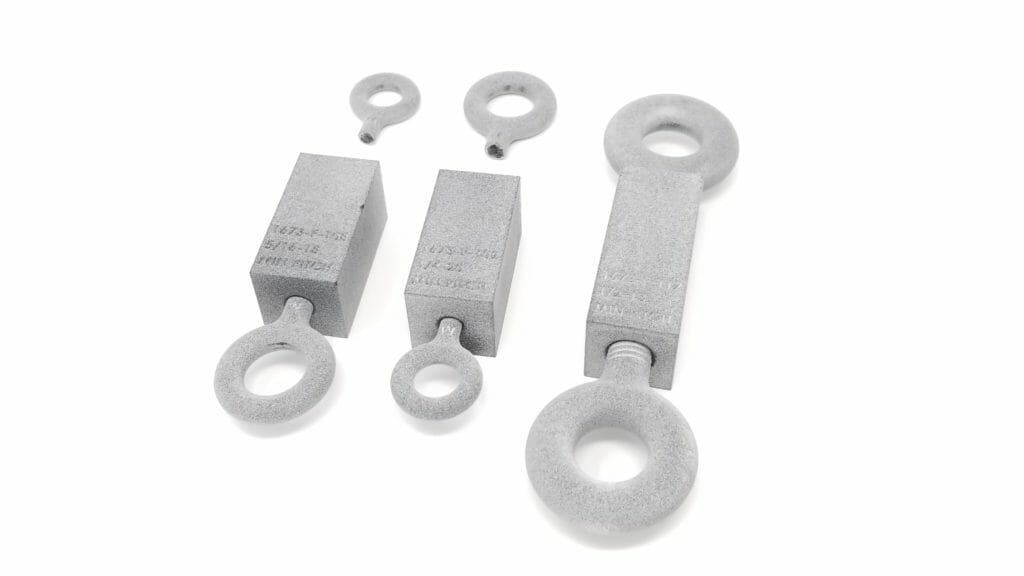 The breaking point for each sample was:

The end result of this testing was the finding that MJF part strength in tension (this is the weakest direction for 3D printed parts) was much higher then initially anticipated and also that holes with threads printed directly in them have the ability to not only hold a fastener but do very well in high load applications!

When working with a customer who does injection molding the question was raised if MJF parts could have inserts sonic welded into them. We took the CAD data for an existing product that they currently injection mold and 3D Printed it on our MJF machine. The parts were then inserted with a 10-32 threaded insert on the same sonic weld machine that is currently used for production of the injection molded part. Here are the results of the MJF sonic weld trial as well as a follow up head to head pull test to determine MJF part strength vs injection molding.

A customer evaluating the potential of producing an end use part using MJF wanted to know how strong a honeycomb structure would be when printed. A test part was developed and pull tested by hand, here are the results:

A machine builder had an application that required a hook that was potentially going to be made on our MJF machine to function under a load that was both in shear and tension. We devised a method of applying these loads to the test part and then produced both the test hook and the fixture to hold it with our MJF machine. Here are the results of that testing:

A customer requested to know how well our standard glue joint would hold up to repeated shock loads. We devised this simple test to prove out the strength of a HP MJF glue joint as well as do a metal vs Nylon wear test at the same time. Here are the results of that testing:

In our never-ending quest to torture test parts printed in Nylon 12 on the HP MJF 3D Printer an idea was proposed. With the rise of injection molded AR-15 lower receivers it would be interesting to see if one built using only the MJF machine would hold up to hundreds of rounds. 250 rounds later it’s still not broken:

We had the opportunity to help out the Saginaw Valley State University Formula SAE team with a additively manufactured air intake manifold that would fit on the teams Yamaha YZF-R6 engine. We produced it with our HP MJF 4200 in Nylon 12. As a bonus we got to see how the manifold would hold up to being bolted directly to the engine block and run hard. The feedback from the team was:

“We ran it on the dyno without any issues, and found an increase of around 8 HP. The highest temp that the flange got to was around 140 degrees Fahrenheit”

Another test that was conducted to determine the heat resistance of the PA-12 material was to replace a cast aluminum air intake elbow on a 5 HP generator with a laser scanned and 3D printed copy. The replacement elbow bolted directly to the side of the engine block and was subjected to temperatures in excess of 200 Deg F. The engine was then run continuously for over 100hrs and the 3D printed part held up without any issues.