F3DP Owner Paul DeWys standing in his office displaying FFL07, Paul has always been passionate about designing and building firearms. This attitude extends to the rest of the team at F3DP as well and is the reason we have pursued being a source for 3D Printing for the Firearms Industry.

Forerunner 3D Printing holds a Federal Firearms License for Manufacturing (FFL 07) as well as a Special Occupational Taxpayer for Manufacturing (SOT 02) and specializes in working with firearms customers to produce both their prototype and end use production parts. We offer a wide range of inhouse services to assist our customers with their projects which include Engineering, Reverse Engineering, Metrology / Inspection, Cerakote, and 3D printing.

Why use 3D Printing?

3D printing with polymers eliminates engineering constraints that are prominent in traditional design-for-manufacture projects. The emergence of this new manufacturing technology has lead to innovations that allow for weight reduction, superior performance, and new advancements in firearms and tactical gear. 3D Printing is also a great way to greatly reduce a companies time to market by shortening lead times for prototypes and also allowing for the bridge / low volume production of parts while traditional tooling is built.

“We usually get requests to deliver parts or products yesterday,” Bassoli jokes. “With AM we can now at least deliver them on the same day.” – Marco Bassoli, Firearm Research & Product Development Director, Beretta

We have printed a range of parts for customers in the defense and firearms industry’s over the years including:

Most of the 3D Printing projects we do for the Firearms Industry is done on our HP MJF Machines using materials like:

With Forerunner 3D Printing having a Federal firearms License for Manufacturing (FFL 07), as well as a Special Occupational Taxpayer for Manufacturing (SOT 02) we can perform prototyping or contract manufacturing of your serialized or NFA firearm components in compliance with all ATF rules and regulations.

What are the licenses we hold? 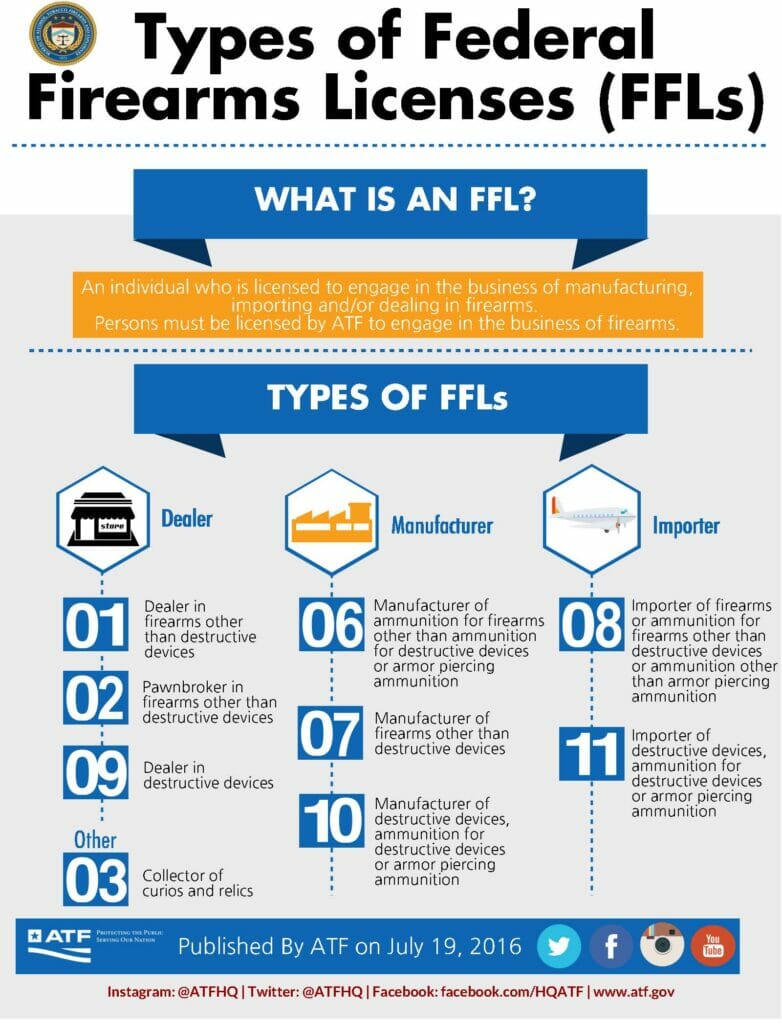 There are multiple types of Federal Firearms Licenses each enabling the person or company holding them to transact in different areas of the firearms business. The chart you see to the right (click on it to view in full size) shows all the different types of FFL’s available and gives a summery of each.

At Forerunner 3DP we hold and FFL 07 which is a manufacturing FFL. This allows us to have customers ship their firearms directly to us for use on R&D projects, testing the fit up of prototypes, and for use as check fixtures during production runs. It also enables us to work as a contract manufacture making firearm parts for customers that are considered the registered (serialized) part of the fully assembled firearm. Without an FFL 07 it is impossible to manufacture any firearm part that requires a serial number to meet ATF requirements.

Just like with the FFL system, there are various different classes of SOT as well, each allows the person or company that holds it the ability to transact in different parts of the National Firearms Act (NFA) business.

At Forerunner 3D Printing we hold a SOT 02 which allows us to manufacture and serialize NFA firearms. These include:

The History of 3D Printing in the Firearms Industry

As 3D printing gained popularity in the early 2000s and desktop printers became more affordable, new possibilities opened for do-it-yourself enthusiasts. Private owners of the first 3D printing machines were able to access CAD files and print simple objects from a variety of plastics. Amid this new wave of 3D printed creations, the first models for firearms and firearm components in polymers began to pop up. However, it wasn’t until 2013 that the first fully functioning 3D printed gun, the notorious Liberator, made its appearance.

The Liberator is a single-shot, polymer-based pistol created by Cody Wilson, founder of Defense Distributed. He published it on the company’s open-source file repository, DefCad, in May 2013. The gun’s publication came in reaction to Makerbot Industries removing firearm blueprints from its popular 3D model repository, Thingiverse in late 2012.

After only two days online, the US Department of State had the files pulled offline on the grounds of an infringement of the ITAR (International Traffic in Arms Regulations) – that the publishing of the files equated to an illicit export of firearms.

The same year that the Liberator ignited a fiery debate about 3D printed guns, additive manufacturing company Solid Concepts printed what’s thought to be the first industrially manufactured gun. Made from Inconel using the DMLS (Direct Metal Laser Sintering) printing process, the gun is called the 1911 DMLS and is a replica of the Colt Government Model 1911.

Fast forward to 2020 and Paul DeWys (owner of Forerunner 3D printing) set out to see if it would be possible to 3D print a homemade functional AR-15 lower receiver out of Nylon 12 on an MJF machine. He started with printing a mil spec lower and put it on a .300 AAC Blackout upper receiver. After 2000rds were fired through it without any issues it was time to take things to the next level and see if the lower would survive firing a larger caliber round.

The mil spec lower was then paired up with an upper receiver chambered in .450 bushmaster, a MUCH larger cartridge. On test shot number 7 the lower broke at the connection point between the pistol grip and receiver. This was not entirely unexpected due to how thin the Nylon 12 material used to 3D print the lower got in this area.

After some review of the design of the mil spec lower receiver and how it failed, a new design was made that integrated the pistol grip into the lower receiver which eliminated the failure point. This design passed extensive testing by Paul on the range using the .450 bushmaster round (Paul’s shoulder is still sore).

After these early experiments with using HP MJF Nylon 12 3D Printed lower receiver parts we found them to be not only viable, but quite impressive. At this point the team at Forerunner 3D Printing decided to start pursuing customer projects from the firearms industry. In September of 2022 F3DP pursued and was granted a Federal Firearms License for Manufacturing (FFL 07) in order to expand the range of prototype and production work we could take on from our firearms customers.